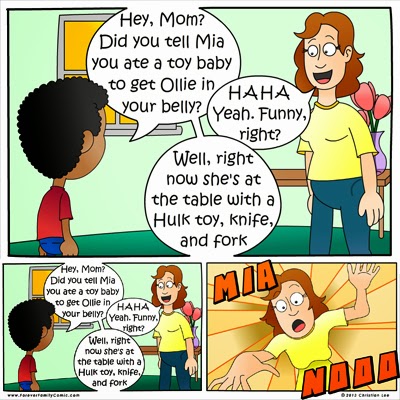 What is your story about?
CL: Our story follows our real-life adopted family. My wife and I adopted CJ and his sister Mia, coming up on 3 years ago. Then, in a baffling moment, found out she was pregnant with Ollie last year…. After 18 years of marriage. We really want to get the word out about adoption, but funny comes first (we hope)
CJ: I write different stories. Right now I do a lot of super heroes and lessons about kids doing right.

CL, are the strips based on true stories, or would you say it's more like funny situations with real people in them?
CL: A lot of them ARE based on true stories (I’ll usually note under the comic if it is). I can’t always post stuff word-for-word, because it’s too long, or has a “you had to be there” quality to it. I think that’s where doing standup for years helps. I can tighten up a moment into a solid joke. I’m not sure if it’s funnier because it’s real, but my wife tends to think so.


CL, adoption is obviously a huge part of your life, and it plays a big role in your comic. Would you like to talk a bit about it?
CL: Adoption is a HUGE part of our life. We were married 16 years before we adopted… and it wasn’t to fill some hole we had. Actually, once it became apparent my wife was 100% O.K. about a life with no kids, I thought, “Hey, let’s adopt.” We just realized there are kids out there, hurting or going hungry, and it felt wrong NOT to do something about it. The day we met CJ & Mia, we knew it was meant to be. They couldn’t be more like us if they had been born to us.

CJ, What's it like being an adopted child?
CJ: I like being adopted. I like not going 3 days without food! I have parents that take good care of me. I think it’s funny when people are confused whether me or Ollie are Mom’s kid. I like when we got our picture taken with the judge on National Adoption Day. 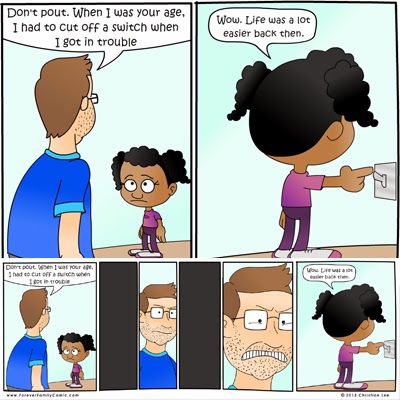 What inspired you to write this comic?
CL: I was traveling as a stand up comic when we adopted. I realized I needed to be at home the nights I was usually away. The word “attachment” is a really big deal in the adoption world. You want to make sure that bond is built strong from day one. I was looking for other outlets to share my comedy and talk about our new family. Outside inspirations are Peanuts, Calvin & Hobbes, and Penny Arcade.
CJ: Seeing other comics and seeing other artists at comic book shows. I’ve always loved to draw and Papa said you don’t have to be an adult to draw comics.

What kind of world does your comic take place in?
CL: The real world and the fantasy/imagination world of my kids.
CJ: Our world, but with super heroes.


CJ, how did the superheroes get here?
CJ: I’m just drawing heroes from D.C. & Marvel, so to me, they were already here. 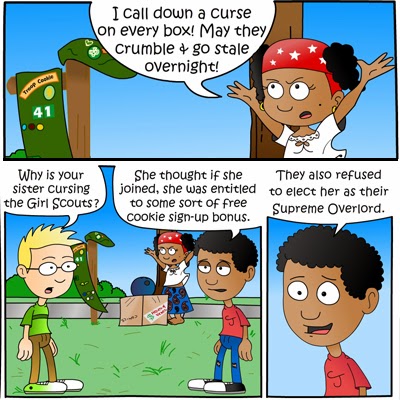 Who are your main characters?
CL: There’s me (Papa) & Melody (Mom). Each of the kids has a super hero alter ego that will be presenting itself this year, plus Mia is known to hand out curses for cash as ‘Gypsy’. CJ (Capt. Lunchbox), Mia (Thermos Girl), and Ollie (O.M.G.).
We also have reoccurring friends for our kids, Ned & Nancy. These are amalgams of children my kids hang out with.


CL, we gotta' know..  does real life Mia really do the curses-for-sale thing? Because.. you know..  that's kinda' awesome!
CL: I wish she did. Once she grasps the humor and a better reading level, she might read them and start. CJ & Mia’s birth mother was also adopted & brought to America as a young girl. She was born into a real-life travelling gypsy clan in Chile. It's believe she suffered a severe infection, leaving her deaf; then her parents just left her on the side of the road. I don’t think she ever moved past some of that trauma, which made her ill-equipped to be a mom herself.

CJ: I’m working on a character of my own, but it’s not ready yet. Right now, I’m drawing action comics or single pictures of my favorite heroes.


CJ: Do you have a favorite super hero?
CJ: My favorite (right now) is Superman, because he has ALL the powers.

CJ: I also notice a character named Howard B. Wigglebottom is sometimes present? Who is he?
CL: I’ll start by saying this is a sore, but important subject in our house. Last year, CJ drew those comics, told us he created the character, and that they were all his idea. Turns out, he was lying. It was a character from a school video and he had ‘lifted’ it as his own. It served as a valuable lesson to CJ. I’ll let him tell you what he learned.
CJ: I learned that it’s O.K. to draw characters that are not your own, but you can’t pretend they are your ideas. That’s stealing. I’m trying to come up with my own character now. I think he will be a kid super hero in elementary school. He learns lessons when things go wrong.

What do you think makes your comic unique?
CL: I definitely have my own perspective on things. I developed my own voice when traveling the country doing stand-up shows. But the comic also has the voice of my wife and kids. Some of the writing comes straight from their mouth. We also tackle headier subjects with humor, such as race and the fact that my daughter only has one kidney – which doesn’t really function all that well.
CJ: I have a different drawing style. My dad says it’s ‘unique’. I’m 7 years old, so that’s different. 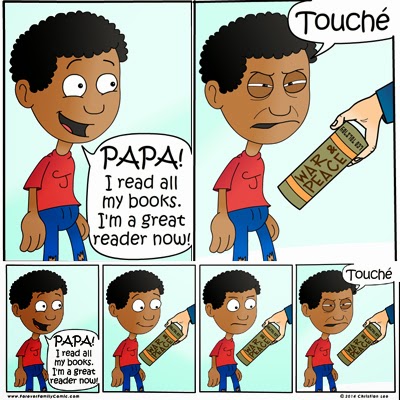 How would you describe the style in which your comic is drawn?
CL: I have a background in web design, and I started when Flash was big. I ‘draw’ all of my comics in Flash. I like the ability to manipulate and change shapes in vector format. I’m admittedly not the best artist in the world, when I set out to design my characters for FFC, I worked with a friend and fellow artist, Micah Acord, who draws ‘Rednecks In Space’. With a history of Flash animation and game design, I work a lot like they did in the old ‘Flinstones’ cartoons. Between that and stand-up, I’m a sucker for a frozen look and exaggerated facial expressions. I also, occasionally do an homage to Lucy the Psychiatrist, from ‘Peanuts’, with Mia as a Gypsy character.
CJ: Right now, my style is action with muscles.


CL, What technique from "Flintstones" are you applying?
CL: I use repeating backgrounds or carry backgrounds/images from frame to frame. I guess some of it can be blamed on my lack of artistic ability, but it’s also a callback to when I first started becoming interested in drawing & animation.

How do you make a page?
CL: Flash and Photoshop, with a basic Wacom Tablet. Images are set at a 1940xVariable. I don’t currently have a custom font for lettering. I’ve recently changed to something I think is more pedestrian, but easier to read. The bonus of drawing digital, is that I can go back and retro-fit my font once I go custom.
CJ: I draw most of my comics in pencil and colored pencil. Papa makes them easier to read on the computer and sometimes he adds color and funny jokes. 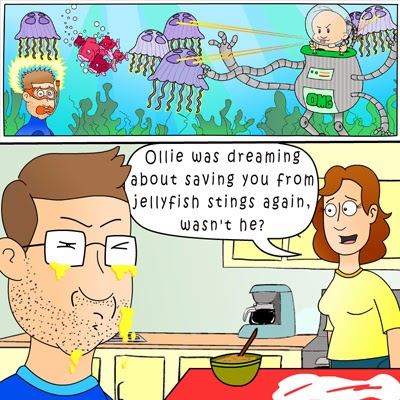 Do you have any plans to sell your comic in print or e-book form?
CL: Yes. Once we have a decent catalog, I hope to bundle them and start selling them. We would probably start at places like SPX. I’m also hoping we can get the word out about FFC and get carried in some of the adoption publications/websites that are out there.
CJ: Yes. One day I’m going to go to an art college. When I’m done with that, I’m going to draw comics and start my own business.

Are you part of any comics networks or groups?
CL: We’ve just started dipping our toe in the water in that regard. We were recently added to TopWebComic and InkOutbreak, but haven’t got any traction there yet. As far as going somewhere for questions& advice, I ask my Jared Cullum, of http://www.PeaGreenCoffeeCup.com/. He is a genius and prolific artist. He has straight up hustle and the skills to back it up. He’s definitely worthy of your next interview.

Have you worked on any other comics?
CL & CJ: No

Do you have any advice for fellow comics writers?
CL: If you have a PC, you can start your web comic for $0. Between tumblr/Facebook/imgur, you can get it out there for ZERO dollars. The hardest thing I’ve found is getting the word out, but it seems to come with time. And thankfully, there are great site like The Great Comics Crawl to help you out.
CJ: I say anyone can draw a comic. You just need to practice. Oh, and go to the store and buy pop out talk bubble shapes (it’s a lot easier).
CL: Nice.


CJ, Pop out talk bubbles? What are these wonderful-sounding creations and where can one obtain them?
CL: I’ll hop in and answer this one for him. I got CJ some drawing pads that, as an added bonus, have pop out sheets for drawing talk bubbles and cell frames. He doesn’t use them that often, but it gives him a basis for shapes and proportions that he didn’t have before. You can find them here on Amazon. 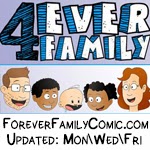 Posted by The Merry Lurker at 4:31 PM

Want to spread the word? Please Copy/Paste the code below to share this promo button on your blog or forum.